This app started development shortly after Pokemon X and Y were released. The intention was to eventually use the camera to import the data from the game, however using an existing free OCR library significantly increased the size of the app and didn't produce good enough results.

This app was never released for fear it would get taken down for copyright. I mainly wanted it for my own use and the challenge of creating it was fulfilling enough for me.

The “Pokemon” tab shows the different region Pokedex numbers, the base stats, possible abilities, type effectiveness against this Pokemon, and breeding information for a selected Pokemon.

Pressing on the top right “Num: Pokemon” button goes to the “Select” view, which can be searched and filtered by regional Pokedex, as well as very simple 2 colour representations of every Pokemon form. 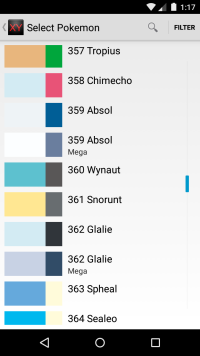 Hold the Stats button to switch the calculator mode between EVs+IVs=Stats to Stats+EVs=IVs. The calculator rounds down IVs results, only Level 100 Pokemon can accurately ensure they have 31 IVs. 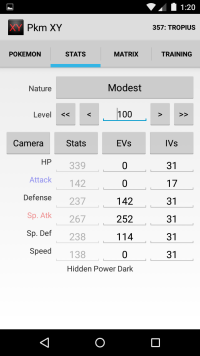 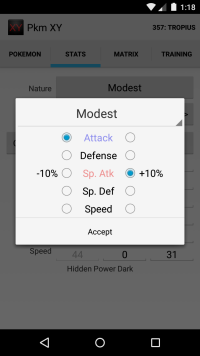 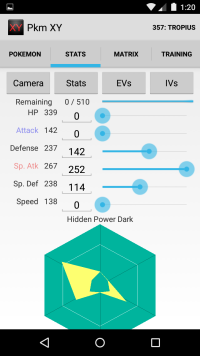 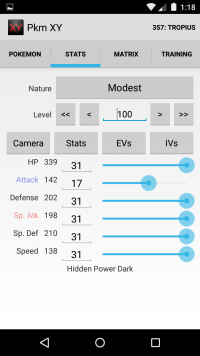 The “Matrix” tab shows what the approximate maximum IVs with no EVs would look like for a Pokemon of a certain level and with various Natures. This was intented for use with X/Y legendaries and Friend Safari which always have 3 IVs at 31.

The “Training” tab suggests where you can go and use Sweet Scent to attract horde battles for EV training. 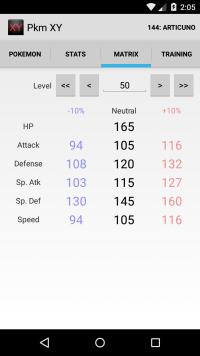 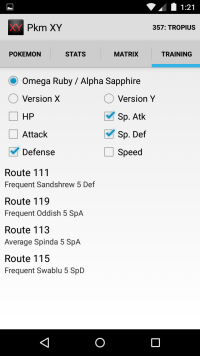